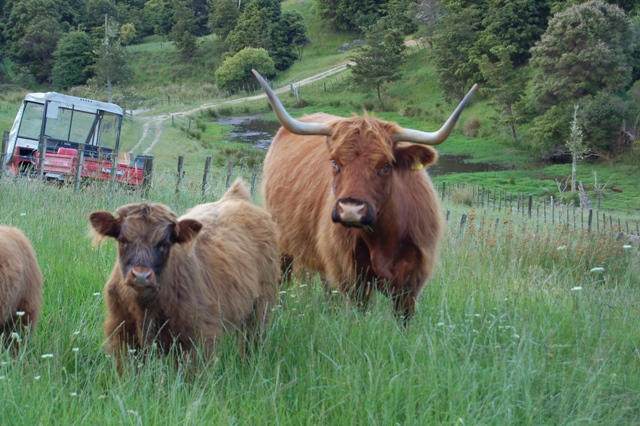 Scottish highland cattle are a Heritage breed that are instantly recognisable by their elegant long horns and thick coats. These are a solid colour: red, black, brindle, yellow, white, silver or dun. Highland calves are very appealing with their teddy bear looks.

The beef from a Highland cow is very tender, which has been proven in two studies from Glasgow University. Originally Highland Cattle were used for skins and hair, meat and milk but as a beef breed they are not usually milked, however there is no reason why they cannot be milked for the house.

We began our Highland Cattle Fold in 2005, and now have more than 100 cattle. Our fold has both Purebred and Full Blood highland cattle of all ages, and most have A & P Show passports.

We usually have a variety of livestock for sale, including in-calf cows or cows with calves at foot, yearlings and two-year old’s for sale - as well as some bulls and steers. The bulls are always assessed after then have turned one year old, in accordance with the NZHCS regulations, by three assessors, marking the bull against the 1882 breed standard, and then offered for sale or retained for our own Fold. 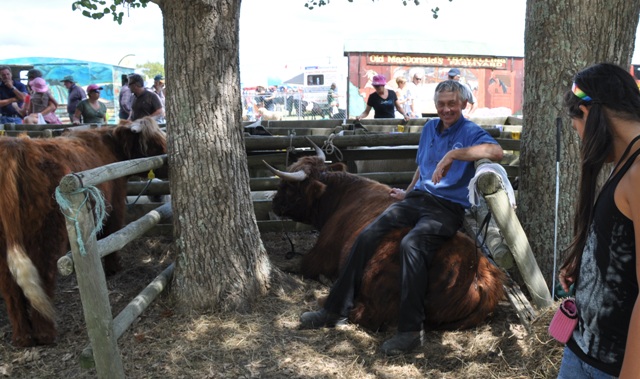 Like all animals, Highland cattle vary in temperament, however, as a cattle breed in general, they are very quiet, and some can be hand-fed with food such as bread, lemons and grain. The more they are handled, the quieter they become.

All our Highland bulls are very placid: we see this as essential for breeding. Many of our cattle have been shown at A & P Shows with great success, and a quiet nature is an important factor in helping to move the cattle through spectators safely.

Highland cattle are slow-growing cattle but they generally live longer than other breeds. They calve ideally as three year old cows, a year later than most, however they continue to calve up to the age of 18-20. This beautiful cattle breed is smaller in size, meaning a farm can carry more of these endearing animals than other breeds of cattle.

They are "lighter on their feet" so they won't cut the ground up as much as the heavier cattle.

This breed of cattle is versatile and suitable for many climates. Highland cattle have a double coat of hair: one short one, and a longer and thicker for winter wear, which protects them from rain, snow and freezing temperatures. In the spring the longer hair begins to thin for the hot weather, but the hair remains longer and still beautiful, thickening up again in autumn. 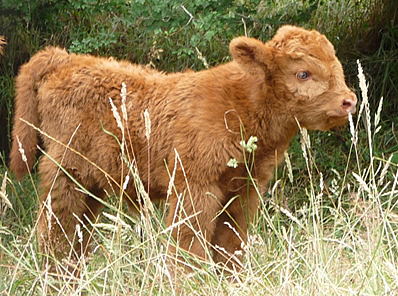 Highland cows are excellent mothers and seldom have difficulty when calving. They love their calves and very rarely abandon them.


A highland cow can live to around 18-20 years and can rear 15 or more calves during this time.

A paper produced by Charles Bruce at the University of Glasgow in 2010 confirms the beneficial properties of pure pedigree Highland beef, previously studied in 1997 by Dr Ivy Barclay amongst others.

Samples of sirloin were taken from all over Scotland and Yorkshire for the study. A rapid slice shear force test determined the tenderness of the samples and chemical analysis included measurements of moisture (juiciness), iron, protein and cholesterol content.

An interesting finding was the lack of expected correlation between fat content and cholesterol levels.

Our bulls have won the Champion Bull award at the North Island Highland Cattle Show since 2013. With these three handsome bulls, we have had a wonderful "crop" of heifers including many Show cattle.

Black Bear son of S.C.F. Black Shadow and Ruby Red of Ruatiti, has produced many winners at various A & P Shows for his previous owners, as well as for us. 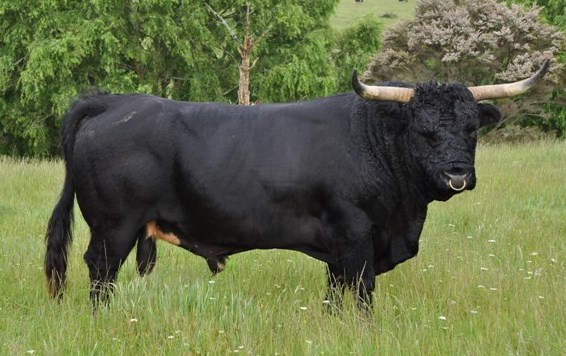 Joining Black Bear as a stud bull, is Eadon Victor, son of Braco Black Sambo and Braco Sassenach Lass, who was born in 2008. Victor has given us some lovely calves, proving his excellent blood lines. 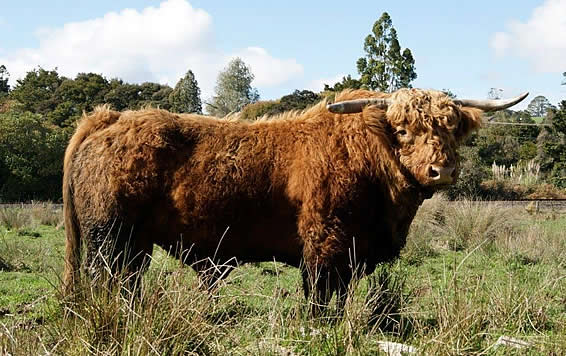 Eadon Cailean, son of Neil of Braeburn and Fernlea of Glen Cannich. Cailean was born in 2008, and again he has given us some very nice calves. . He is the bull pictured above, with Doug using him as a seat at the Helensville 2010 A & P Show. 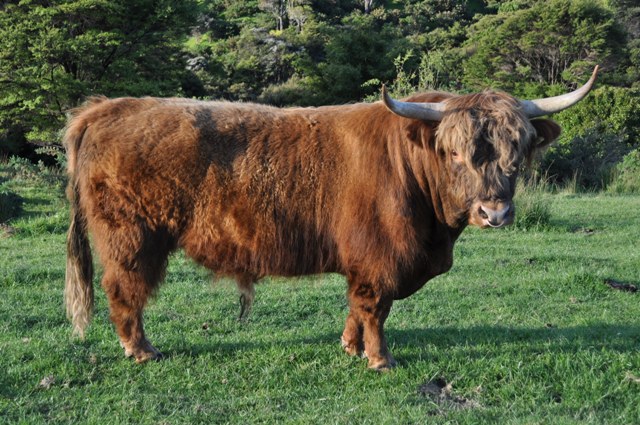 Baxter of Munro was our Stud Bull for three seasons. 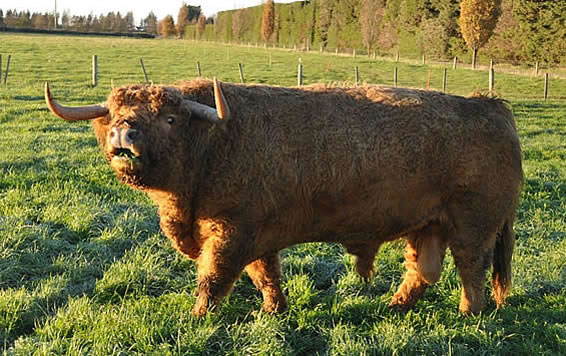 Eadon Menteith was shown as a calf and would give Mortimer a real challenge if he was shown this year. (We only show one of each age, apart from calves.) 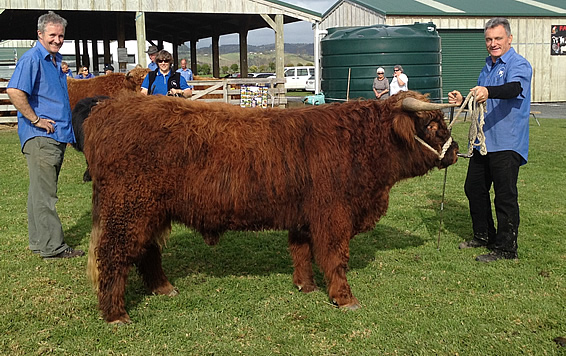 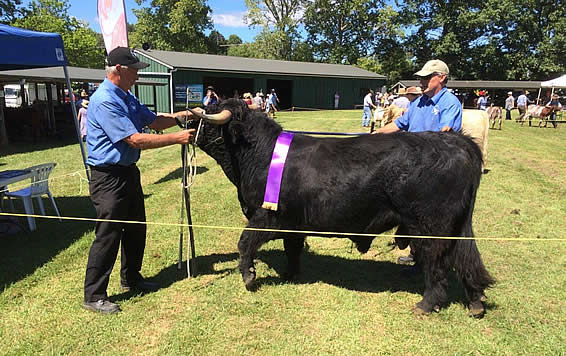 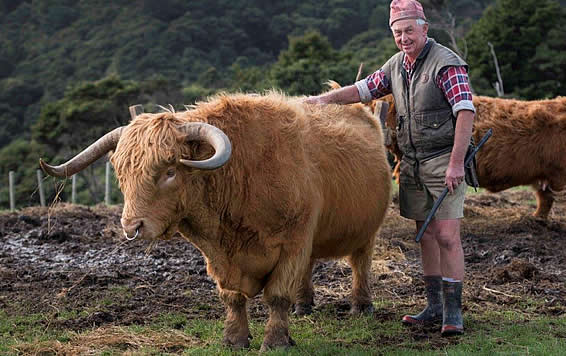